I’m a comic writer. I write funny things. Books, essays, tweets and short videos. Mostly because I like to laugh. And I like to get laughs. It makes me feel like I’ve made the world a nicer place to live. Just a teensy bit.

There’s a second, but equally important reason I write things that are funny: I can’t help it. It’s my way of coping with the fact that I just can’t make sense of this planet. The people on it. The funny, bizarre and sometimes cruel things they do to each other. Even the way the universe is constructed. Bosons, leptons, quarks, gravitons, dark energy, dark matter, black holes, white holes, parallel universes, sheesh! The universe seems not only to be run by a bunch of maniacs, to quote sci-fi great Douglas Adams, but designed by one as well. It’s all wildly, entertainingly, hysterically insane. Making fun of it all seems like a natural.

I suppose I could make a placard and march up and down the street, screaming my dissatisfaction with the way things are. Or break some store windows or throw Molotov Cocktails into businesses along Sunset Boulevard.

I’m just not the violent type.

So instead of getting nihilistic, angry or bewildered about it all, I take another tack. I draw attention to whatever craziness I see by exposing it with exaggeration and humor. It’s called satire.

The problem is that most people don’t take comedy seriously. They hear the joke, utter a quick laugh, and assume that’s the end of it.

No real lasting change, right? Only drama can do that.

The pen isn’t mightier than the sword, is it?

Comedy can be a powerful instrument for change, but we humans fail to see the subtle change in our thinking because we’re too busy laughing.

Consider this. Comedian John Cleese says that when people saw Beyond the Fringe, the early 1960s London comedy stage review, the audience screamed with laughter. “It was a liberation!” Decades of stuffy protocol dissolved in a matter of minutes. Indeed, until that point, comedians rarely made public fun of the Queen, the clergy, the Prime Minister or members of Parliament. Things started to change and it all started with humor.

Since I’m on the subject of British humor, take what I noticed while watching Monty Python and the Holy Grail recently. The scene: two peasants challenge King Arthur’s authority by flatly stating that they didn’t vote for him. Arthur counters by saying that a lady of the lake held forth a sacred sword, Excalibur, for him to carry, signifying his rule by divine right. The peasants still weren’t buying it. “Strange women lying in ponds distributing swords is no basis for a system of government.”

While I find this scene very funny, it’s also making a very serious point about the insane methods royalty used to justify their power. Divine right is up there at the top of crazy thinking, but it has plenty of company with prophesies, omens, bloodlines or familial assassinations.

So am I advocating that this scene is going to make people in the Middle East or Southeast Asia rise up and overthrow their ridiculous monarchs or totalitarian regimes?

Hardly. But like a stone dropped into a pond, the ripples fan out, causing waves on the shore. Little by little, splash by splash, the shoreline is changed. Watch a few episodes of Last Week Tonight with John Oliver, or Samantha Bee’s Full Frontal and you’ll understand how you can laugh and be angry at the same time.

In ending, I’d like to see comedies taken more seriously. To point, in the 86 years that the Academy Awards have been given out, only six Best Picture awards have been given to pure comedies.* Just because the messages in a comedy come in on little cat feet, doesn’t mean they don’t have impact. It’s just that we lovers of really great comedy prefer our messages served up with a few good laughs.

*Dramadies not included in this figure. 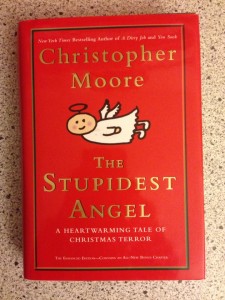 Now that the holidays are upon us, it’s time to deck the halls with boughs of holly and flesh-eating zombies. What better way to celebrate our annual bout of family dysfunction and commercial overconsumption than by reading a comedic tale of a coastal California town overrun by zombies brought to life by an inept angel. Throw in a C-grade movie star, a pot-smoking town sheriff and a repulsive Santa who takes a fatal shovel to the face and you have a heart-warming tale the whole family can enjoy. Brought to you by one of the funniest comic authors around: Christopher Moore. So buy it and curl up next to the fire with this very funny book. Just keep a shotgun by your side. Ho ho ho.