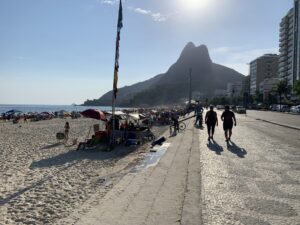 I’ll begin this blog with a joke. In this case, one about Brazil, told to me by a native.

Two guys die and go to purgatory (this is a mostly Catholic country, after all). The attending angel tells the two guys as part of their penance before entering paradise, they will have to eat a bowl of shit each day, served in the manner of any country of their choosing. One chooses Switzerland, the other, Brazil. A long time passes and the eventually, the two guys runs into each other in heaven. The guy who chose Switzerland asks the guy who choose Brazil how he dealt with the bowl of shit each day, noting that the Swiss delivered his allotment each day with the usual Swiss efficiency. The guy from Brazil replies that it wasn’t bad at all since he never had to eat a thing. “The first day, the bowl arrived minus the shit. On the second, the bowl was delivered with its contents, but the delivery guy forgot the spoon. The third day, the delivery guy didn’t show up, and on the fourth, the delivery truck broke down…you get the drift.

The punchline is that in Brazil, nothing works like it’s supposed to, but life goes joyfully on.

I pondered this on the flight down to Rio to meet my partner who was already there on business. I was a sophisticated traveler and didn’t expect London streets to be populated with people who dressed like characters from Downton Abbey any more than I would expect to see old widows dressed in black with bundles of sticks on their backs trundling up hillsides in Italy. The world had changed. But what about Brazil?