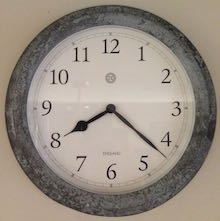 I recently finished a manuscript for a sci-fi comedy and sent queries to a handful of literary agents in New York. I marked my calendar at eight weeks, the average time it takes for most agents to respond. Then I waited. And waited.

In the deafening silence, the malevolent spores of doubt landed on damp, fertile ground in my head. The doubts grew and grew, thriving on shaky assumptions, a lack of information, and wild speculation.

Here are the reasons that popped into my brain.

1. My email isn’t working. Things seem to send out with a whoosh from my account, but nothing is coming back. Well, things do come back. Emails from a representative of the United Nations informing me that I have a titanic inheritance waiting for me in Nairobi. Or amazing investment opportunities involving car engines that run on avocados. Those seem to sail clear through to my inbox. But emails from agents with seven-figure contracts are getting hung up somewhere on the Internet.

2. The agents I contacted had terrible accidents between the time I sent them my query and today. This leads to a bigger problem. One agent I can understand. But all 10 of them? I come up with an answer: they were all on a skiing trip in the Himalayas. Avalanche probably. Or they were victims of a Great White shark attack while snorkeling in a group off Cabo San Lucas.

3. The Many Worlds Interpretation is at play here. The instant I sent out my manuscript, the universe split in two. In one universe, all the agents received my work, loved it, fought to represent me, and the winner secured a seven-figure contract from a top publisher. Unfortunately, I live in the other universe.

4. We’re all just living in a matrix-like simulation, our brains being fed a faux reality from a system of advanced supercomputers while our brains bob up and down in oversized beakers. Since nothing is really real, then what does anything matter? Your manuscript isn’t real. The agents aren’t real. Why worry?

Then a miracle happened. Within a hour of sending out my 11th query, an agent with an impressive list of writers responded, asking for a synopsis and 50 pages of my manuscript.

I sent everything out via email.

I’m back to waiting.

But at least I have a smile on my face this time around.