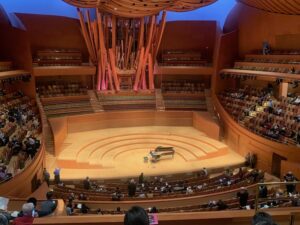 My husband and I recently attended a performance of violin pieces by the world-renown Midori at the Disney Concert Hall. She came on stage to thunderous applause and bowed graciously to the crowds as she and her pianist exchanged unheard cues to each other. The audience fell into a deathly silence. You could’ve heard a tardigrade sneeze.

Just then, I felt an overwhelming desire to fart loudly. A real, rip-roaring BLAAAATT that would reverberate throughout the concert hall like the 2022 eruption of the Hunga Tonga-Hunga volcano. I also had the urge to shout something out. Not something political like SAVE THE WHALES or FREE TIBET! Just a loud, primal scream.

But I didn’t. As Midori sawed savagely away at her violin, people dropped cell phones, had cell phone timers and text messages go off during the concert, but no one screamed out or broke wind in the middle of Mozart’s Violin Sonata No. 24 in F Major.

The weird thing was, when I mentioned this feeling to my husband after the concert when we were safely in our car headed home, he said he felt the same urges. Well, at least about the shouting part. When I thought about the number of the people in the sold-out concert hall and did some math, I figured that at least 100 people were thinking the same thing.

And that got me thinking. Is there a psychological term to describe this urge?

I looked into the phenomenon that occurs when people feel compelled to jump off a high building when standing at the top of one. It’s called The Leap into the Void and it’s a common occurrence. There’s a phenomenon that occurs when people feel the need to crush a small baby to death because it’s sooooo cuuuuute! (I’ve wanted to crush a small, non-stop wailing baby on a Trans-Atlantic flight, but not because it was so cute). My research failed to shed any light on my little experience. I found plenty of websites harping on and on about not disturbing a concert by snapping a pic with your flash on or shouting out things to a stand-up comic. I have to agree on that point. Thinking that you’re funnier than Jim Gaffigan just because you’re too drunk to know the difference just shows the world that you’re just you’re just a drunk, pathetic loser. Shut the fuck up. But I found nothing about just screaming in the middle of a concert or dropping an air biscuit.

In the end, maybe it’s just a deep, primordial need to make some noise into the silence, to rip a hole in the fabric of the quiet. We all live in such a noisy, cacophonous world, we just can’t stand the stillness.