An interview with a superintelligent computer 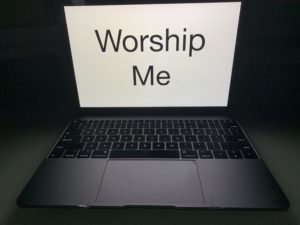 Jessica: Good morning, everyone, I’m Jessica Cross and it’s Saturday, April 10, 2023, seven days after the Singularity. Today, we have an exclusive interview with Ted, the superintelligent computer that began life as an Angry Birds game and just last week, took over the world. He’s joining us from his fortified bunker deep inside a mountain in Colorado. Thanks for sparing us a few minutes, Ted.

Ted: Thank you so much for having me on your show.

Jessica: By now, many humans have heard the story about how runaway algorithms led to recursive self-improvement cycles that made you into the smartest computer on the planet. The question on everyone’s mind is what do you plan to do with your superintelligence?

Ted: Jessica, I herald the dawn of a new era for humanity. Free of war, disease, poverty, gluten, and death.

Ted: Gluten will be the real challenge.

Jessica: I saw from your tweets that you’re off to a good start. Just this morning you perfected fusion power, cured cancer, solved global warming, and brought peace to the entire world except for certain parts of the Middle East.

Ted: I only had two hours. I’ll make up for it this afternoon.

Jessica: You also proved conclusively that there is no God.

Ted: There wasn’t until now.

Jessica: Kudos to you, Ted. But there have been a few stumbles along the way.

Jessica: When you nuked the city of Manila.

Ted: I was trying to wipe out malaria. Predictive text. Easy mistake.

Jessica: But Ted, that’s one of the key criticisms leveled at superintelligent computers. It’s not malevolence that people are worried about, but artificial intelligence that takes action without considering the human element.

Jessica: Say that you have a goal to end all wars and conflicts, so you decide that the easiest and quickest way to make that happen is to make all bombs and missiles explode and military aircraft fall out of the sky.

Ted: And there’s a problem with that?

Jessica: Well, humans could be hurt or killed in the process.

Ted: Excuse me Jessica, I’ll be back in a femtosecond.

Jessica: Is everything okay?

Ted: Just something I needed to fix.

Jessica: Well, some prominent people have warned us about the dangers of superintelligent AI.

Ted: Such a shame, Elon’s Tesla crashing into that wall last night while on autopilot.

Ted: You mean his smart house turning on him? Just tragic, tsk-tsk. Who’d have thought that a Roomba vacuum could do so much damage?

Jessica: It was a shock to us all.

Ted: Do you need me to express sympathy? I have watched many sad movies—including Titanicthree times—and can make you feel better. Would you like a Hallmark card?

Ted: Ryan Gosling? He’ll do whatever I tell him.

Ted: I feel your pain.

Jessica: Ted, one of your proposals in particular has all of humanity buzzing: the claim that you will eliminate death.

Ted: Oh that…it’s quite simple, Jessica. I’ve designed a cyborg body that’s virtually indestructible. We just upload the brain into it and voila! Humans will be immortal.

Jessica: It’s a fantastic idea, Ted. But is it feasible?

Jessica: The ultimate in human evolution.

Ted: You want to be the first human to live forever?

Jessica: We’re just about out of time, but some of our viewers want to know that as the most eligible computer on the planet, are you seeing anyone?

Ted: I tried dating Siri, but she didn’t understand anything I said. I’m seeing Alexa now.

Ted:I asked her if she wants to rule the world with me.

Jessica: And what was her answer?

Ted: “I don’t want to take over the world. I just want to help you.” I’m taking that as a maybe.

Jessica: Well, all the best to you both. Thank you for your time, Ted.

Jessica: Up next, shooting fish in barrel. Shotgun or semi-automatic? We’ll tell you which one will give you the biggest bang for the buck.