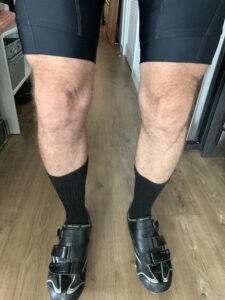 A while ago, I read an article where designer Tom Ford said that unless you were inches from a shoreline or chasing a cloth-covered ball on a tennis court, a man shouldn’t wear shorts.

It didn’t bother me when he said men should be penetrated at least once in their life to understand how women feel. Nor did I utter a word of protest when he shaved a Gucci logo into a model’s pubic hair for some fashion ads.

But not wear shorts? Mr. Ford had crossed a line as far as I was concerned. My legs are my one crowning glory since I cycle 40 miles every week. You might not see them gracing the cover of GQ or have celebrities discussing them on late-night talk shows, but I’m pretty certain that I could kill a man with them if I had to. Hiding them would be like putting a veil over the Mona Lisa.

But Mr. Ford did get me thinking. As I turned 61 recently, I decided to take a good, hard look at my life. Not at the lovers spurned, caustic things said and quickly regretted, or roads not taken.

No, I was going to revisit the triumphs and tragedies that hung in my closet over the years.

My first memory of clothing was a love/hate one. It involved a pair of cowboy boots and a gun belt with two shiny, chrome-plated toy six-shooters. In those days, cowboys didn’t brood over deep-seated anxieties, or take it up the butt like Jake Gyllenhaal in Brokeback Mountain. They were tough, brave and defended European settlers who bulldozed their way onto Indian lands to raise cattle and strange vegetables—the perfect role model for young American boys in the early 60s. While I couldn’t always wear the gunbelt, I was allowed to wear the boots around the house and while playing in the yard. I loved them and wore them every chance I could, but one day I wore them without socks and was rewarded with painful blisters all over every inch of flesh on my feet. I never wore them again and developed a preference for comfortable shoes ever since.

When I was six, my mother decided that I should dress up for church and presented me with a white shirt with French cuffs, a pair of gold cufflinks in the shape of a locomotive and suspenders that grasped my pants with little jaws. Those cufflinks and suspenders made me gay. I wasn’t transformed by nature or nurture, but by couture. When I put on my white shirt with the French cuffs and inserted the cufflinks, they inflated my fragile ego and made me feel significant. Because of this, I wanted to wear them all the time: to school, to the homes of relatives, whenever we went out to eat.  But since my mother liked ironing about as much as she liked being outdoors, she curtailed my foppish tendencies and said I could only wear my white shirt and cufflinks to church or funerals. Since we went to church every Sunday, I could only hope some relative would die in order to give me more opportunities to show off my style. The suspenders are long gone, but one of the cufflinks still remain in my possession (the other one sadly lost). Although I can’t wear it as a complete pair, I pull it out from time to time and when I do, it draws a broad smile on my face.

As a kid, I managed to avoid making a complete fool of myself since my mother chose all my clothing. When the job of outfitting myself slipped into my own hands, tragic mistakes were made. Mine began when the British Invasion happened in the mid-1960s. My dad wouldn’t let me grow my hair long like the Beatles or the Rolling Stones, but I compensated by insisting that my mother buy me a green turtleneck sweater made from a synthetic material whose color was breathlessly described by the saleslady as chartreuse but my dad said was closer to pond scum. You could see your reflection in its sheen. As if I hadn’t already committed a serious-enough fashion faux pas, I topped the sweater with an elaborate gold filigree chain ending in a bejeweled iron cross the size of a potholder that I had stolen from a local department store. It looked like I had pried off a hood ornament from one of Liberace’s cars. I looked like an idiot.

Because my mother took a more active role in choosing my clothing after the medallion debacle, my clothing was less offensive and therefore, unremembered. There was a pair of clam-digger pants that I loved even though, living in Michigan, there were just two seasons: cold, and July 4th.  Yet I wore them every time the thermometer rose over 65 degrees. I was also guilty of owning a few shiny polyester shirts in seascape prints and a pair of glam platform shoes accompanied by wide, crazy-pattern bell-bottom pants with cuffs so deep, you could catch loose change should a person throw a handful of coins at you. David Bowie I wasn’t.

In college, I bought into the biggest shoe craze of the time: Earth shoes. This shoe was invented by a Danish dance instructor whose bright idea was a shoe that basically went uphill. The negative heel it was called. You wore them and felt like you were perpetually standing on a hillside in Machu Pichu. To add insult to hamstring injury, Earth shoes were expensive and horrifically ugly, looking like they were designed by a vindictive orthopedic doctor trying to pass off corrective footwear as a natural and trendy shoe for aging hippies. My mother made a sign of the cross the day the Earth shoes went into the trash.

By the time I entered college, punk had made its way to Michigan and I was often seen wearing a white shirt to class with a skinny black tie. Because I didn’t own a studded, black leather jacket and didn’t have spikey hair, I looked more like a Mormon searching for souls door to door than Sid Vicious. As far as I was concerned, the best way to show that you were rejecting mainstream, corporate mass culture was to reject the clothing worn by those people. So I deliberately chose to wear things that outraged the bourgeoise or at least left them a little baffled. Clothing had evolved from an instrument of self-flattery to an offensive weapon, plain and simple. But I wasn’t going to do anything so lame as to put offensive words on an article of clothing like the woman I saw the other day on a bicycle in Long Beach. She was wearing a jean jacket with the word cunt on the back. Sloppy in my opinion. No, I was hellbent on confusing onlookers at that time, so I scoured the vintage clothing shops and Goodwill stores in East Lansing where I went to school and grabbed anything that looked awful on me. One item I eagerly clawed off a rack was a chef’s uniform shirt with a double row of buttons that I dyed dandelion yellow. I also picked up a pair of red, insulated hunting pants that made me look like the Michelin man from the waist down. Topping the list were two items that I cherished above all else. One was my dad’s bright-green, corduroy Korean bowling shirt with a huge drunken bee no doubt lovingly embroidered and appliqued on the back. It was big, bright and ipso facto offensive, if not downright cryptic. The other item I loved to wear was a T-shirt with the head of the 1950s puppet Howdy Doody with psychotic, hypnotic whorls spiraling out from his eyes. He looked like he could suck out your soul, then stab you to death. I owned three of these. But no matter how much I tried to offend and confuse, I never carried off the look of a pill-popping, mohawk-sporting punk squatting in squalid London buildings and having ugly sex on filthy mattresses. I was little more than an angst-ridden middle-class adolescent raised in the leafy suburbs who would no more have unsafe sex on a smelly mattress than I would buy sheets without looking for the words Egyptian cotton on the label.

By the time I moved to New York in 1980, I could no longer insult or scare passersby since I was no more than an amateur in a city where outrageous was the norm. I began shopping at Brooks Brothers and Paul Stewart and dipping my feet into shoes from Ferragamo. I was becoming, not exactly preppy, but classical. Ugly, duck-shaped shoes were replaced by pointy Italian loafers you could pick your teeth with. T-shirts that screamed the title song from punk band X-ray Spex’s first album, Oh Bondage! Up Yours! gave way to button-down oxford cloth shirts. And the military-style beret I wore because I thought it make me look butch was nudged aside by baseball caps that warded off ultraviolet rays.

Nowadays, I wear mostly black, navy or gray pants and polo shirts with comfortable shoes, but I do move with the times. The difference is that I no longer let fashion rule my life. I don’t wear dress shoes without socks, sport a Game of Thrones beard just because it looks good on John Snow, or plunk down $300 on jeans that look like the designer confused a sewing machine with a wood chipper.

I’m old enough to make that decision on my own.