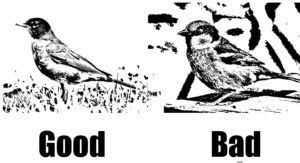 Let’s face it. Spend months on a desolate island in the Pacific looking at the beaks of Galapagos finches and before long, you might begin to realize something is going on there. Naturalist Charles Darwin did and it led to the theory of natural selection. Those individuals with heritable traits better suited to the environment will survive.

That’s not the way my father saw things in the natural world. He had his own rules that made you worthy of passing on your genes. And they weren’t based on heritable variation, differential reproduction, or sexual selection. They were based on the fact that if your species beautified his world, kept it clean and tidy, or performed some service in the interest of mankind, you deserved to have descendants. If you dared to cross him, you were written off as an annoying pest.

Take the tomato hornworms which invaded our vegetable garden every summer. Granted, these creatures ate the vegetables that sustained our family, but it wasn’t like we were dustbowl sharecroppers, minutes away from starvation. I mean, we had a Farmer Jack supermarket the size of a football field just three miles away. But nonetheless, he would pick the offending creatures off his prized vegetables and squash them underfoot.

At first, I found his brand of swift justice to be completely unfair. The tomato hornworms who made an easy meal of his beefsteak tomato plants were just doing what came naturally. It wasn’t as if you could train them to eat dandelions or pate de foie gras. Plus they were tomato hornworms. They knew where they were supposed to be. Despite my protests, he continued to squash the offending insects, exposing the main drawback to natural selection as a rule of nature: it was too damn slow. Given time, the hornworm could probably evolve to develop a hard shell to ward off the lethal footware wielded by my dad. But in the meantime, the hornworm just couldn’t adapt fast enough as long as it lived in our garden.

It was the same story with birds. While nature rewarded those species that were quicker, flexible and more aggressive, my father felt that the success of a species should be based on its ability to produce beautiful songs. This seemed rather arbitrary to me, like having to admire a repulsive opera prima donna just because she could carry a tune. Cardinals, robins and mockingbirds got the seal of approval from my dad, while invasive species like starlings and house sparrows had annoying and repetitive chirps with no melody, the kind that didn’t deserve to grace the skies of Michigan.

True, starlings in the natural world had calls that sounded more like someone dragging a squeegee on a dry window played backward, but I’ve seen videos on YouTube of starlings whistling Dixie or Mozart’s Eine Kleine Nachtmusik, so I’m not sure if they should be written off completely. I mean, I’ve never heard a Robin or Blue Jay whistle out Beethoven’s Moonlight Sonata or ask Whatcha doin? But once my father put something on his shitlist, there was little the species could do to earn redemption. Eastern bluebirds, for some reason held a special place in his heart, although they were rarely seen in Michigan where I grew up. He attributed their rarity, again, to aggressive sparrows and starlings, and after doing a little research, found that he was partially correct. Their decline in the 1970s was caused in part by the dreaded starling and house sparrow, giving him even more reason to heap scorn on the invasive species. Never mind that the bluebird’s declining numbers was also due to the fact that we humans bulldozed their native habitat only to put up thousands of artificial, soulless subdivisions in their place. I think in the case of the bluebird, my father’s attraction was purely physical. Their songs were average, but what they lacked in the voice department, they made up for it with electric blue feathers and showy red breasts, earning a place in my father’s pantheon where it became a story of survival of the prettiest.

When it came to larger animals, the same rules applied. If they were pastoral and pretty to look at, they got a free pass. If they dug up lawns, tipped over trash cans, or took a dump on my father’s exquisitely manicured lawn, they were cruising for a bruising. Rabbits were cute, seemed to steer clear of our vegetable garden and were therefore okay. Our pet cat, Mrs. P, was tolerated, but that didn’t stop my father from making comic kicks behind her back as if he was going to send her sailing through the air over a distant goal line. He would complain that Mrs. P was basically loafing on his dime, but he justified her existence by saying that she kept the local mouse population in check. This is also why hawks, owls, snakes, and other predatory animals were spoken about with such high regard: they performed the much-needed task of keeping my father’s world from being overrun by vermin. Nothing else landed on my dad’s short list of acceptable animals. Squirrels, because they raided my dad’s bird feeder, were banned from our little plot of land. Racoons, opossums and dogs running roughshod over our yard were, of course, chased or peppered with well-bred taunts.

But there was a class of animals that was accepted by my father without question. These were the Warner Brothers cartoon characters that invaded our house every Saturday morning. I would be in my anointed vantage point on the floor in my footie pajamas and my dad would sit behind me in his wing chair, watching the misguided attempts of Wile. E Coyote to catch the roadrunner. He would roar with laughter as the coyote was hit in the face with shovels, blown up, or repeatedly fell hundreds of feet into rocky canyons. He also got a kick out a character called Foghorn Leghorn, a bombastic, loud-mouth, know-it-all southern rooster. Foghorn would spout home-baked asides to the camera while he suffered pretty much the same round of comeuppances as the coyote: explosions, being hit on the head with various heavy objects, numerous pratfalls, and the occasional gunshot. The message here was clear: my father piled love on an animal if it demonstrated the ability to tell jokes or perform slapstick.

Things got murky when my dad went deer hunting in northern Michigan each November. My sister and I were completely against it, although this is where he employed a special evolutionary rule that he evoked to justify his need to blow holes in woodland creatures.

“If we don’t weed out their numbers, they’ll overpopulate and starve to death. Do you want that? A starving deer?”

My usual reply to this specious logic would be something along the lines of “I thought cars did a pretty good job of thinning their ranks.” A case in point was my mother’s 1975 225-horsepower, four-barreled V8 Pontiac Catalina death machine. It could take out an entire herd of bison and leave barely a scratch on its gleaming chrome bumper. Deer were child’s play. He also had little to say when I argued that deer hunting was a purely random act. Inebriated hunters were just as likely to blow away a strong deer as a feeble one. Survival of the whatever.

Whenever I backed him into a corner like this, he would come out swinging with his fail-safe, back-up reply that didn’t really quell my protests, but one that he felt ended the conversation: “How do you think that hamburger appeared on your dinner plate? Someone had to kill it.”

Even though he never returned home with a dead deer strapped to the roof of his car, he had a point there that was hard to refute. I loved hamburgers, wore the most stylish leather shoes I could cajole my mother into buying, and had several pairs of leather gloves that I adored because I felt they gave a touch of class to my tenth-grade wardrobe. But these were domestic animals, made for eating or wearing. They didn’t need to adapt to their environment. They just had to survive long enough so they could be made into sirloin or fashionable items.

In the end, long after his passing, tomato hornworms would continue to ingest tomato plants nationwide, raccoon populations would explode and take up comfortable lifestyles in big cities and starlings would extend their range from Alaska to Mexico.

My sister and I turned out gay, so we didn’t procreate.

Darwin, it seems, had the last laugh.